Aristotle: “The elephant surpasses all other animals in mind and wit.”

Elephants are amongst the words most intelligent species, with a brain mass of over 5kg- it is bigger than any other land animal. The brain structure and development of elephants is remarkably similar to humans. Emotionally, creatively and imaginatively they are well turned to be quality artists.

Elephants show a wide range of behaviors associated with learning: grief, humor, mimicry, art and even language. They are self-aware, using tools of compassion and cooperation with others- all these lead to a consensus that they are equal, if not slightly more intelligent than the likes of dolphins and primates. There awareness of self, combined with the range and depth of emotions they feel are linked to their creative attributes, allowing them to create profound elephant art. 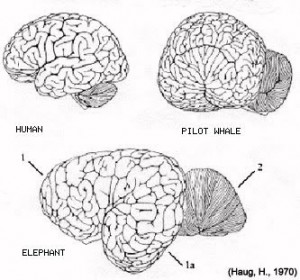 through experiences. Elephants have a very long period in their lives for learning at around ten years. The majority of other animals are born with a brain close to weight it would be as a fully grown adult. Instincts are very different from learned intelligence in fact their function for storing memory is far larger than humans. Thus: “an elephant never forgets”.

Elephants awareness is astounding: elephants in Africa will self-meditate on leaves of tree’s, which induces labor. Kenyan people also use this tree for the same purpose. They can also mimic the cries from a host of animals. The discovery was found when Mlaika, an orphaned elephant, would copy the sound of trucks passing by at her elephant camp. Elephants in the wild can even decipher calls from their friends and relatives and can stay in touch when out of sight.

Bandula the Asian elephant was a resident at Marine World Africa, in the US in the 70’s. She managed how to break open her lock used to keep chains on her feet, using various pieces of equipment. The most complex piece was a Brummel Hook, a device that closes when two opposite points slid together. Once she has managed to free herself, she would help all the other elephants escape too. There was also a bit of deception involves in the break out also, such as looking around, making sure nobody was watching.

Ruby, also an Asian elephant who stayed at Phoenix Zoo would often eavesdrop on

conversations, when the keepers would talk about her. When she heard the word “paint” she became very excitable. Her favorite colors were yellow, blue, green and red- these were the most commonly used colors by Ruby the elephant artist. It should be noted that these colors were also the colors worn by her keepers at the zoo. She was obviously very fond of her keepers.

Elephant Artists ability steams from a innate creative ability that is found in animals and mammals including dolphins and primates that share a similar intelligence. They are obviously very emotional and thoughtful creatures and elephant art gives them the opportunity to express themselves.